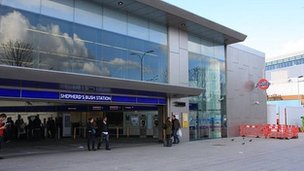 Close to £500,000 will be spent on replacing the ceiling of a west London Tube station which was refurbished in 2008, Transport for London (TfL) said.

Work has already begun on the suspended ceiling in the ticket hall after it showed “signs of movement”, TfL said.

Westfield is paying for the work. The station will remain open while the work continues until June.

The ceiling showed “signs of movement and distorts very slightly under some conditions”, TfL said.

The ceiling was safe but its support structure could become weaker over time.

A TfL spokesperson said: “We are carrying out works at Shepherds Bush Underground station ticket hall to replace the ceiling and its supporting structure and replace the external thermal insulation.

“The scaffolding is inside the ticket hall but passengers are still able to use the station and the escalators as all the work is being carried out at night.”

You might also like to visit our website to read about mineral fibre ceilings, or read our previous blog on how we won gold award for the best ceiling installation